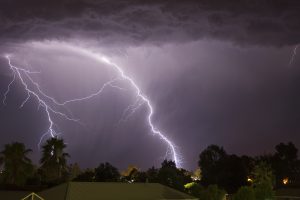 On April 18th is perhaps an interesting flight, because this was over to Timmerman. This flight was really rather an interesting flight, because it set off going to Milwaukee, and then on the way back, Field Morey said, “Would you like to experience your first thunderstorm?” There was one, and he said, “Well, we’re going.” It wasn’t a very heavy thunderstorm; otherwise we wouldn’t have done it, I’m sure. But he said, “We’re going to fly through this towering cumulus, and I’ll tell you what’s going to happen.” And he described how we would have a downdraft, an updraft and then downdraft, etc. And sure enough, we went through this thunderstorm during the approach, and I learned what a “moderate thunderstorm” was and how one had better avoid them. That was a good lesson that you wouldn’t get with many instructors, who would deliberate take you through a thunderstorm. So then, the logbook entry is, “Thunderstorm over Madison, VOR, alpha, to Morey.”