Dr. Smithies has trouble keeping his plane at the right altitude and has to face either losing oxygen or having ice accumulate on his plane’s wings. 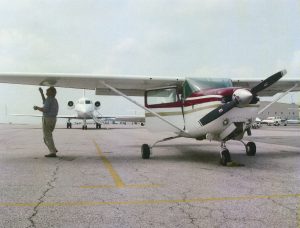 I have another adventure in the 20866, which recalls some vivid memories. This flight began on March 21st in 1984, on my way, I think, to Toronto, but it might have been somewhere else, because I think it was flying from Morey to Toronto. But this flight on March 24th was a two-hour flight, which an hour and 45 minutes of it were instrument flight. And the entry there is on top — by 7,000 feet, with light, clear ice, and over the lake at 11,000. But then, rather foolishly, I remembered the regulation or recommendation or regulation that one shouldn’t stay above 11,000 feet, above 10,000 feet, without oxygen more than an hour, and I decided it was time to come down, because of the oxygen rule. That was a foolish decision in this particular case, because it brought me down into the top of the cloud base, and, unknown to me, the top of the cloud base, when there is close to icing conditions, is the place where you pick up most ice, and I very quickly began to pick up ice in the clouds as I descended, and then tried to climb up. So here I am, over the lake at 11,000. I went up to 13,000, and then started down before the shoreline — I’m over Lake Michigan at this point — and picked up severe icing. So here I am, foolishly descending and I couldn’t get back up, and still in the cloud as I descended to 8,000. Now, at that point I diverted to Muskegon, and managed to land with a 300-foot ceiling and one and a half miles in fog. But on the ice, on the wings, was a half to three quarters of an inch on the leading edge of the wing, so that’s why I couldn’t climb anymore. So that’s an adventure with ice that I remember clearly.