Smithies and Morey finish the last leg of their “great adventure.” 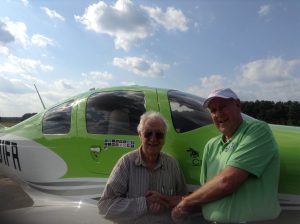 We stayed in Cardiff for several days to attend the wedding, and then took off on September 17th, that’s five days later, to go south to France. Mostly in the clear across the Channel via Jersey and Guernsey and Bordeaux where we landed in France was warm and sunny.  But we couldn’t find a room for the night.  I think it was — I don’t know why it was.  We went to try to get a room.  But nowhere could we find a room.  There was something going on there or there was a little bit of anti-American feeling in France at that time.  And we ended up rather miserably sleeping in an airport car that we’d borrowed, which was a Volkswagen VW.  So there wasn’t much space in it to sleep.  Very uncomfortable night.  And got out of there as fast as we could in the morning to go on from Bordeaux, France to Zaragoza, Spain.  So that was September 18th we arrived.  And September 22nd flight leg number 10 was from Zaragoza, Spain back to Southampton.  The flight along the west edge of a front.  Forecast was for thunderstorms but they didn’t materialize and we had a visual approach with a cruise takeoff and climb taking 4 hours and 5 minutes.

So now we’re September 22nd.  We’re back in the UK and beginning our trip to return. This was something that I later found out was much more worry to Field Morey than the other trip because in going from America to Europe you usually have tailwinds but going from Europe to America you usually have headwinds.  And so he was very concerned about that part of the flight, although he’d not spoken much about it yet.

So on September 2nd we’re leaving Southampton on our way to cross the Atlantic.  So on our return trip the first leg was — we needed to get to Prestwick again.  And the first part was flying from Southampton to Leavesden Airport, which is now closed. And we stayed the night with Roger, ready then to continue on the next day, September 23rd, a brief flight, two hours or so, to Prestwick.  Mainly IFR with an ILS approach to a modest ceiling.  Still wet at Prestwick, but there was a good forecast for the ongoing flight to Iceland.  There was one rather entertaining incident on the way up to Prestwick because we kept hearing communication to us by air traffic control to Speedbirds with a number.  Speedbird so-and-so or Speedbird so-and-so.  And neither Field nor I knew what Speedbird was.  And so we said to air traffic control, “We have a question.”  Said, “Yeah, go ahead.”  We said, “What’s this Speedbird we keep hearing about?”  And they said, “Well, sir, that’s British Airways.”  And a voice from outer space said, “Oh, fancy not knowing that.”  Which I replied by “Well, you know, we’re not all local.”  However, fancy not knowing that.  In a very snobbish British accent.  Typical of British Airways flights in those days, which was still very much so-called upper-class people only flew.  Nobody who was not in that category ever got to fly.  But I don’t know whether that’s still true.  I’m sure it’s not.  But it was then.

Then beginning of the real trip home.  Prestwick to Reykjavik, which had been the second record of our first flight.  And we didn’t attempt to establish a record in this flight.  But it was nonetheless 772 nautical miles from Prestwick to Reykjavik and took us 4 hours and 32 minutes. Now we stayed overnight in Iceland.  Vaguely remember that.  Quite nice food, the hotel as I remember.  But here we are on September 24th, the fourteenth leg of this flight, Reykjavik to Frobisher Bay in Baffin Island.  which is west of Greenland.  So that meant flying all the way across Greenland.  It turned out to be 1,247 nautical miles and took us 6 hours and 54 minutes.  With a note in the logbook underlined heavily.  My longest nonstop flight.  So I think Field must have been allowing me to fly that leg.

But I remember Greenland, and it was very spectacular, it says in the logbook.  Several hundred miles of ice cap, nothing but ice.  Nothing but ice.  So it’s the opposite from expectation.  Iceland is green and Greenland is ice.  Field was feeling a little bit in need of his smoking.  He’d begun to try to stop smoking.  And there’s a note here that there were no matches in the emergency kit. So here we are having landed at Frobisher Bay, still the same day, continuing without interruption to try to get further on our way home.  And Field was suffering from two things.  First of all he was very tired.  And also he’d quit smoking.  And that was bothering him.  And he was quite irrational toward the end of that flight trying to ask me for our position when all we had were these ADF beacons, nothing one could do about position until you reached the next ADF.  And I was getting quite worried about him and urged him to quit.  And so we landed at Moosonee, Ontario with too little fuel to go on.

I was very glad to see Field on the ground there.  And going to the airport, Moosonee, Ontario, trying to find somewhere to eat.  And everything was closed.  It was night and late.  But the airport manager said, “Oh, I think we can manage something.”  And he managed to scrounge up a couple of steaks and gave us an evening meal.  Whether it was at the restaurant or in the airport I don’t remember.  But I do remember very well the great relief and thankfulness at the kindness of this person to find something for these two overly tired fliers.

So after a good night’s rest, we are now on the very last few legs of the flight, from Moosonee to Sault Ste. Marie, Michigan to clear customs.  This was a brief flight in which I was the pilot, and 339 miles, just short of two hours. So after leaving customs in Sault Ste. Marie, now we were on next to the lake, from Sault Ste. Marie to Milwaukee, Timmerman Field in Wisconsin, 260 miles, and an enjoyable VFR flight at only 1,000 feet above ground, or one should say above water, over nearly 250 miles of Lake Michigan below cloud cover, without using the autopilot by choice, and I send as far as I was concerned.  And then the last leg was run by Field, was 64 mile flight from Milwaukee, Wisconsin back to Morey Airport. So the summary of the flight was that we flew altogether 9,302 nautical miles, which is equivalent to 10,697 statute miles in 68 hours and 57 minutes, and Field flew 37 hours and 18 minutes and I flew 23 hours and 39, but as my notebook says, as my logbook says, “But it was a joint effort all the way,” really it was Field Morey’s effort, not mine.  But that was the end of this great adventure.