Dr. Smithies begins training for his record-breaking transatlantic flight with Field Morey. They are on their way to attend the wedding of Dr. Smithies’s cousin. 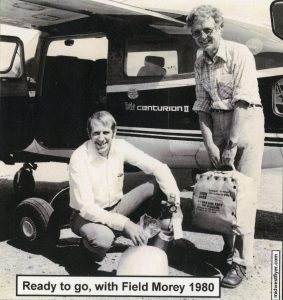 One of the most involved and exciting adventures of my flying career, if you can call it a career, was a flight across the Atlantic with Field Morey as pilot in command and me basically as a contributing passenger is probably the best description, because it didn’t need two pilots. This whole adventure began because my cousin [Judith Parker?], born [Judith Anderson?], her son was being married, and I was invited — or one of her sons, her oldest son — and I was invited to the wedding, and I mentioned this to Field Morey, and he said, “Oh, well, why don’t we fly there?”  And that’s the beginning of an adventure that really he must have been contemplating for quite some time, and in fact probably had already thought about to the extent of even locating an aircraft that might be suitable. And in fact the aircraft was a Cessna 210 single-engine high wing that had wing tanks on it.  That’s to say it had a little extra — some extra, about 80 gallons extra fuel as a result of fuel that could be carried in the two tanks that extended the wings. So it had a longer range than an ordinary 210, but nonetheless didn’t have any special tanks in the fuselage, which is usually a feature of single-engine or other aircraft that are going to be ferried across the Atlantic.  So the Cessna 210 certificate number November 29233 was owned by one of Field’s acquaintances or ex-pupils.  He had agreed that Field could use this aircraft.

And so the first time I got introduced to it was July 12th, when I flew 29233 30 minutes dual with Field.  And the note in my logbook is “The 210 we will take to Europe, exclamation mark.  A nice airplane to fly.”  So I began to learn how to fly the aircraft, so at least I was competent in it. Then when I got back on July 14th, 1980, I was cleared for solo in the 210.  And all went well.  Brief solo, 15 minutes solo.  So this is the beginning of this adventure of getting familiar with the 210, and as far as I’m concerned the beginning.  And learning how to fly it well enough that I could fly it solo.

And another thing we wanted to practice was could we take off using less power, because we didn’t want to use — the minimum amount of power, minimum amount of fuel requirement.  So there’s an entry on September 1st.  Morey local with the 210 29233 test flight to 23,000 feet with a cruise takeoff.  The cruise takeoff is underlined.  Fifty minutes in the climb.  And we used 15 gallons.  I’m not the pilot in command there.  It’s entirely Field Morey.  But that was one of the tests that we did, could we get to high altitude, and could we take off without using full power.  The answer was yes to both these questions.

And then now on September 7th, 1980 is the beginning of this long adventure beginning proper.  A series of entries which I’ll go over gently.  There is a photograph on record of Field Morey and myself with the life raft.  That’s another part of the adventure that I have not yet spoken about.  We needed to have a life raft.  And so we managed to get a — borrow, I think — a life raft from someone.  And there’s a photograph of Field Morey and me with the life raft shortly before getting aboard the 210 on the trip.

We also had to have survival suits because of course if one goes down in the North Atlantic without survival suits you’re not going to last very long.  And there were two sorts of survival suits possible.  There was a very tight black rubber foam type of suit which are used by divers who are snorkeling or free-diving. Very commonly seen on the beaches in North Carolina.  Those are very common.  But it was impossible to get one of those on in the restricted space of the cockpit of the 210.  And one didn’t want to wear these the whole way.  It would be extremely uncomfortable and too hot.  So we managed to find somebody who had what were called dry survival gear, which was still a completely enveloping rubber fabric suit that one got into through a zipper all the way from the crotch to the neck.  And get into this, and your feet will be inside, and your legs will be inside.  And once you were inside, you could zip back up and it would be tight around the neck.  And there was a hood that could be inflated.  And so you had a dry air protection from the cold.  But you also had to get into this thing during flight.  And so I remember distinctly practicing could you get into this thing and maintain control. But we had to practice putting those green canvas air protection suits on in the aircraft.  And we found that we could in fact do it fairly easily.  It was not as difficult as one might imagine.  It just took a lot of you might say contortionings while keeping control of the aircraft.