Dr. Smithies learns some aerobatic maneuvers, and meets the author of a favorite aerobatic manual while he’s visiting a friend in Sewannee, Tennessee. 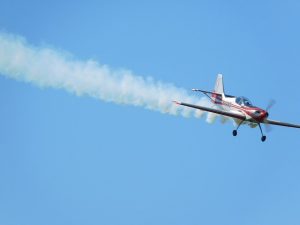 We’re picking up then with aerobatics in the Cessna 150, 52, the Aerobat, 7312 Lima, and the entry is interesting. Second aerobatic lesson, so that was, I’m looking back to see the first aerobatic lesson. But that must have been on October 19th, when I was flying 7312-Lima before with Field Morey, of course, in the airplane, aileron rolls, and accelerated stalls, spiral glide, precision landings, etc., beautiful day, so that’s  actually the second flight in 7312-Lima, but the beginning of a whole series of flights in that aircraft as I learned to do aerobatics from Field Morey, and then by myself. I also add that sometime around then, managed to find a rather special book, or manual, called the basic aerobatic manual, by William K. Kirschner. And this was a very remarkable book because it was illustrated by sketches of what happens during aerobatic flight as viewed from inside the aircraft. Almost all manuals show the position of the aircraft in different maneuvers, but the views are, as it were, from looking at the airplane rather than looking from in the airplane out, so it’s a remarkable manual, and very instructive and used to have the things that I refer to later on as most common errors for different maneuvers. So, it would tell you if you’d done this, and it didn’t go right, what was the most common error. (laughs) And I found that I did many when I was going solo later on, I found that I quite often made one of the common errors. There’s an interesting sequel to this story about the aerobatic manual and flying the aerobat. We have to fast forward to 1990, in other words, 11 years fast forward to an adventure which picks up the same thought in many ways. Because, I’d been invited by one of my former postdoctoral fellows, Walter Nance, to visit him at a country resort that he was fond of in Sewanee, Tennessee. So with my wife, Nobuyo Maeda, we flew from Chapel Hill to Sewanee, Tennessee, Franklin County. The flight was two hours and 40 minutes, of which 20 minutes were IFR, so it was an interesting flight there, but not particularly difficult. So here I am with Nobuyo, Sewanee, Franklin County. And what Walter Nance invited me, or invited a friend to visit us for supper together, and this friend was a pilot, and we got to chatting, and I said, oh yes, I was telling him about my old experiences in the aerobat, because I understood that he was interested in aerobatic flight, although I didn’t realize who he was yet. And, after saying, oh there’d been this marvelous book that I used when I was doing those flights, Aerobatic Manual, and he got a bigger and bigger grin on his face, and then he said, “I wrote that book.” So, it was a delightful experience to meet Bill Kershner in the flesh, as it were.