Dr. Smithies trains to be able to fly in the coveted “diamond formation” in a glider plane. 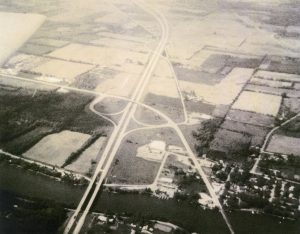 I don’t know who initiated the adventure that I’m going to be talking about.  But the first record I have in relation to it is a flight in 1982, in November, November the 13th, where I was pilot in command with the Blanik L‑13, 48028, and I had as a pupil Jay Levy, who had not been flying for a long time.  For about 20 years, he hadn’t been flying a glider.  And we did four flights together.  I have a note on the…  The first flight was a demonstration flight, and instruction, on to 3,000, on a cold day with very limited sun.  We did stalls and approach — and then, with Jay, takeoff and flight on tow, etc. somewhat hairy takeoff.  That’s what it says.  But that was the beginning of my association with Jay Levy. Then I began preparation for an attempt to get a Diamond altitude badge with the Soaring Society, meaning I have to have — I’ve forgotten what the gain is, something like a 20,000-foot gain.  And since one was going to go to a high altitude, it was necessary to get some experience of what happens if one is short of oxygen.  And so I went to St. Luke’s Hospital in Milwaukee.  And I have from them a certificate of completion.  “This is to certify that O. Smithies has successfully completed an altitude decompression test to 30,000 feet in the altitude chamber at St. Luke’s Hospital.  The above-named subject successfully removed his oxygen mask at altitude for a period of 90 seconds, in order to acquaint himself with altitude-induced hypoxia.”  So that you learn what happens, if you’re short of oxygen.  It’s very interesting and well-known that it’s rather like getting drunk.  And so a typical thing would be to ask you to count down in 3s from 100.  So it would be 100, 97, 94, 91, 88, 85, etc., which you can do quite easily or relatively easily normally.  But if you’re short of oxygen, you very quickly find you can’t get very far.  And you begin to laugh about it, as if you…  (laughs) “Oh, I just can’t do it!” And that’s typical of hypoxia, that a person gets rather happy, rather like a drunk.  And that was part of that acclimatization, getting ready for this test, and testing also my recording instrument, which was a Replogle recorder, which shows the hyperbaric chamber starting at sea level and going up to the equivalent of 30,000 feet or nearly up to 30,000 feet, for quite some time.  So the trace shows this.  So we’ve got, now, the beginning of preparation for the altitude.  And then I have some tests in 866, the Cessna 172, just testing the recording of the barograph.  “866 exploration,” it’s called.  (pause)

And then we come to the day of a flight for the Diamond altitude.  We went to Black Forest Gliderport, and not far from Denver, and began preparation for the flight.  Jay Levy was with us, also was Ed Adib, who was a much more experienced glider pilot than Jay and a conservative flier.  Jay was very far from conservative and, in fact, occasionally did some things which would be considered somewhat debatably safe, including landing in a parking lot, from a glider…  But anyway, we went to Black Forest, waited for the winds to develop suitably to generate a wave.  The wave forms as the wind comes over the high-altitude mountains to the west of Black Forest.  And then Black Forest itself is a lower altitude than the plain.  So wind comes from the west and goes over the mountains there, coming down into the lower altitude. East of the plateau, waves are generated at high altitude.

So that, on January 23rd, after waiting some time and eating rather (phone rings) splendidly — as a result of Jay Levy’s inclination to buy expensive food and make fancy meals.  But he did introduce me to a cheese which I still very much enjoy. The cheese is Port Salut, S‑A‑L‑U‑T.  And I still find it a very enjoyable cheese.  One of the things Jay gave to me was a love of that cheese‑‑ But anyway, we had to wait quite a time, with…  The weather was poor and was snow.  And it was not particularly pleasant.  But on January 23rd, there was a good wind.  And so I went in the Schweizer 2‑32, which I’d already been checked out. And now dual again, in the Schweizer 2‑34 — 2‑32, that is, November-2477-Whiskey, dual and up to look for the wave.  And there was a strong rotor, as recorded there, and enough that the towrope was broken.  My notes say, “Wave-check flight, through ‘strong rotor,’” in quote, [page?]…  Hit the canopy once.  But not excessive, with the help of the dive brakes.  Oh, tow release.  We didn’t break the towrope.  Tow release at 14,000 feet.  And back, with a notch trial on the way.  The notch is a way of recording on the barograph that you’re off the tow, where the glider is dived and then pulled out of a dive, in a way that couldn’t possibly be done on tow.  Means diving and pulling out of a dive.  There’s a story about that, which I’ll tell at some other time, of another individual at Black Forest, who notched the barograph so severely that the aircraft wings were bent.  And his seat was completely collapsed.  And the builders, Schweizer, calculated that he pulled 12 G’s in that notching of the barograph.  Of course, the aircraft was totally useless afterwards.  But it survived and he survived, amazingly.  Anyway, this was notching the barograph for the rotor.  And, “Preparation for the real thing!” exclamation mark.

But it was much more interesting than that rather prosaic description is.  Because I found that, as I climbed in the wave, which was very enjoyable…  Once you’ve gone through the rotor, the wave itself is beautifully smooth.  However, the canopy began to frost up.  And I found that I was feeling dizzy, somewhat of a difficult situation, alone at high altitude in a glider.  But the oxygen system had what was called a blinker, that you could see that you were getting oxygen.  Because as you inhaled, the blinker would open.  And then it would close again, when you exhaled.  And so it will go (inhales) open, (exhales) close‑‑ (inhales) open, (exhales) close.  And you could then see that you were getting oxygen.  And you could also determine your rate of respiration.  So one of the possibilities was that I was dizzy because I was hyperventilating, and I’m getting rid of CO2­ too much.  But I was breathing at a normal rate.  There was no indication of hyperventilation.  And so I began to wonder, “Well, what could it be?”  And then I thought, “Well, it’s because I’m frosted up, the canopy is frosted up and I’m keeping my wings level by looking out of a little space on the left canopy that is not frosted, and on the right side of the canopy.  So I’m moving my head from left to right to keep the wings level.  And I’m just moving my head too quickly, that I’m making myself dizzy by just moving my head rapidly.”  So I just said to myself, “Well, slow down with your head movement.” And when I did that, I ceased to be dizzy.

But I’m still there now, frosted up.  I can’t see out, except through the side of the canopy.  And eventually, the wave peters out and, although I stayed at altitude for quite a long time, it was clear that I couldn’t get any higher.  And so now, how to go home?  Well, I can’t see out very well.  And so I thought, “Well, I’ll use the compass and I’ll fly back using the compass and get down to altitude where it will thaw.”  But I looked at the compass and found that the compass was frozen.  And so I couldn’t use the compass anymore for direction.  And then I realized that I could tell from the sun…  Although I can’t see the sun, I can see, from the light on the canopy, when I’m facing the sun and when I’m not facing the sun.  So knowing the time of day, I know approximately which direction to fly in order to get back towards home.  So using the light of the sun, I was able to fly back home.  And, of course, at a lower altitude, the frost disappeared and the flight was continued to a successful conclusion.  So my notes convey a little bit of that.  “Two notches and climbed in moderate wave to about 28,000, then slowly to 38,400 on the altimeter” — 38,800 actual, by the barograph ‑‑ “And frosting over fairly extensively, with some loss of orientation.  Tried for about 30 minutes to stay up but had to quit “but recovered over the Air Force Academy and descended OK on the ground. So it was an exciting day and one that I remember very vividly.  Great adventure.