Dr. Smithies and Morey try to set another record-breaking flight as they fly back toward the U.S.

But the adventure wasn’t over yet.  There was quite a lot more in this flight to talk about.  So the next leg from Reykjavik was a much shorter leg and we weren’t really worried about fuel for it.  It was then from Reykjavik to Prestwick, United Kingdom, in Scotland.  Not a very long distance.  And the first one, the Goose Bay to Reykjavik, was 1,343 nautical miles.  And this next flight was only 765. But we were interested in time, because of trying to get another record for that part of the flight. However, we were, as my logbook says, restricted only to fly at 11,000 rather than our better flight altitude of 23,000.  And we were restricted to 11,000 by an exercise over the Atlantic.  And we had headwinds again.  As we headed toward Prestwick over the islands of Scotland, the Stornoway Islands, the weather worsened over Stornoway.

But the approach to Prestwick was with the clock ticking because we were not doing terribly well on the record time.  And Field Morey put the landing gear down with only 15 seconds to go.  And I remember distinctly worrying, in fact touching the lever to remind him to get the gear down.  But he knew of course and had it down with 15 seconds left.  So we touched down at 4 hours and 59 minutes.  And the previous record was 5 hours and 58 and a half minutes.  So we’d beaten the record by a necessary margin.  And so we now have a second record from Reykjavik to Prestwick.  With a note that it was a very Scottish afternoon.  Gray with low clouds and drizzle.  It was a record that was fairly easily beaten.  That one didn’t hold up very long, that record was easily beaten.

And there we are now at Prestwick.  So we didn’t hang around at Prestwick but took off almost immediately to go to Leeds and Bradford Airport very close to my home in Halifax. And we went into a night landing at Leeds and Bradford where Roger, my brother, and Harry Whiteley, my friend, and Jonathan, his son, were waiting for a happy reunion.  So we arrived in Leeds Bradford on September 10th with a nice stay there because the next flight is September 12th.  Leeds and Bradford to Cardiff, Wales.  But that was very notable because of very high winds.  A note saying very high winds on the takeoff, gusting to 54 knots.  So really high winds.  And this was the only time I ever remember Field Morey saying, “I’d like you, Oliver, to be on the controls at the same time as me so we can prevent them moving harder than I can stop them from moving.”  In other words to have extra strength on the controls.  It was a very gusty takeoff. 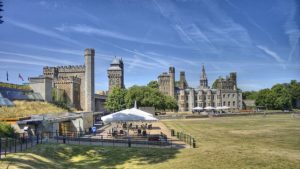 And during the climb the groundspeed was only 46 knots, such was the headwind.  And there were waves over the Pennines both down and up.  So during the climb we would sometimes find that we were climbing very rapidly and then a few moments later because of the wave we would not be climbing at all, might even be descending.  So it was a case of flying through strong waves to get out of Leeds and Bradford that day.  The winds at Cardiff happily were a modest 25 knots, and to the wedding, etc. is in the notebook.  So we arrived at Cardiff, Wales ready for the wedding on September 12th, 1980.