Dr. Smithies and a friend run into trouble when flying to a convention. 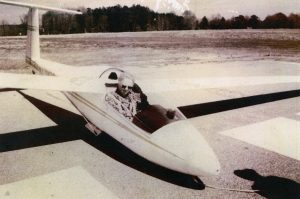 So this is an account of a flight in 1984, that began on May 29th, when I flew the Cessna 172, November-20866, into Chicago/Meigs, to pick up Raju Kucherlapati, my long-term scientific and personal friend. We were going to a scientific meeting in Long Island — or in that general area. So I went into Chicago/Meigs on the 29th, a very straightforward flight, an hour and five minutes, high visibility, a smooth flight with a tailwind. And on the way there, I checked out a couple of airports as possible places for emergency landings with the glider. But then the flight itself began on May 30th. But I knew that the weather in New York, where we were going to land, at Farmingdale, New York, Long Island, which is just east of New York/Kennedy airport, that the weather there was poor. And so I had already learned from previous experiences a wise thing to do was to fly from your beginning, to some point where the weather is quite good and refuel and fill up, so that you could now take off from a reasonable weather to the destination of poor weather with enough fuel on board that, if you couldn’t get into the destination, you could go back to the place where you’d refueled. So this was my plan on that day. So we left on May 30th, Raju Kucherlapati and myself, in the old Cessna 182 (note: 172), from Chicago and landed at DuBois, Pennsylvania, after three hours and 13 minutes, to pick up fuel. VFR, in the clear, out of Meigs. And then had a tailwind, on the top of the overcast, at 11,000, after Cleveland. I’m sorry, that’s a little bit unclear. But that was the first flight, to pick up fuel at DuBois, Pennsylvania. And then, from DuBois, Pennsylvania, now we’re going to Farmingdale, where the weather may be poor. And, in fact, it was poor. At, 8,000. And then diverted to Victor-232, to [Lissa?]. And then radar vector over Kennedy. And cleared for the ILS, one-four runway, at Farmingdale. But the old (laughs) aircraft localizer was not reliable and it failed during the approach, and so that I no longer had the ability to fly the ILS. And so I flew through the localizer. And, of course, air traffic control knew this. And I knew it. And they said, “You’ve flown through the localizer.” I said, “Yes. The instrument isn’t working. And so I would like to fly a different approach into the airport.” And I said, “I’d like to fly NDB,”nondirectional beacon approach, into Farmingdale. Because 20866 had a very reliable NDB instrument. And they said, “We don’t have an NDB approach.” And I said, “Well, according to my book, you do.” “Oh, yes! We do.” So they cleared me for the NDB approach. I start the NDB approach. And it was a difficult one, because the nondirectional beacon was some distance away from the airport. And so you’re flying from the NDB to the airport. And they don’t have very low approach altitudes. So I’m still not seeing yet the ground. And then I get a call from air traffic control — say, “Oh, you’ve lost the beacon. Re-contact approach.” But, of course, I hadn’t. They were thinking a step backwards. But I had to go off the frequency and go back to approach and tell approach, “No, really, everything’s OK.” And so I resumed the NDB approach. But now I’m fairly far along the approach and very close to the airport. And I look down through the cloud below me and I can see the airport all right. So I pop down through this hole. But I’m now too far down the runway to be able to land. And this was an approach to Runway two-two, is my recollection. And so I’m down below the overcast but too far down the runway to land. So I asked the tower, “Two-Zero-Eight-Six-Six would like to land on the north-south runway.” And they said, “Two-Zero-Eight-Six-Six, you’ve got clearance to land on any runway.” (laughter) And my decision, at that point, was whether to go round the buildings or over them, and I was sufficiently low. But I went round and landed  satisfactorily on the north-south runway and taxied to the parking space. And then I sat on the seat and I said, “I think I’ll sit for a minute.” And it’s really rather interesting, because quite unknown to me at the time but later remembered is that the guy who flew all the way round the world without refueling…when he landed, with not very much fuel left, he said, and literally, “I think I’ll sit for a minute,” before he got down. So he and I, but in quite different circumstances, his much more important, had the same feeling, that we just want to sit for a minute before we get off the airplane. But I remember it very well. “I think I’ll sit for a minute.”