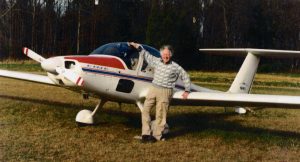 Then, if I look again, the next date is 1977, a long time past, so that’s another 14 years. And that, there’s a history related to that, because my first marriage had been ended amicably at that time, and I no longer had to mow lawns, and thought I would begin to take some flying lessons again, so I went to the airport, and asked if Field Morey was still around, and sure enough he was, and began to fly again with him. And so we had the entrance in April 13th, 1977. I’m now 52 years old. But, there are only three flights on the 13th, 19th, and 21st with an airplane, and then I see an entrance on 4/23, April 23rd,the first flight in a glider, because I go to the airport nearby, where gliding is occurring, “Tobacco City,” and there I find an instructor who took me up in the Schweizer 22C. It didn’t take me too long to get back to be able to solo in the aircraft, so on the third of May, 1977, 15 minutes, first solo after a long time. And then, I’m allowed to go solo on the 28th of May. I remember thinking that, a little bit nervous on this one thinking, “Well, here I am by myself. Maybe I’ll survive.” (laughs) I had some trepidation, but this was supervised solo on the 28th of May, in the glider.