Dr. Smithies and Morey start the actual journey toward England, by way of Iceland. 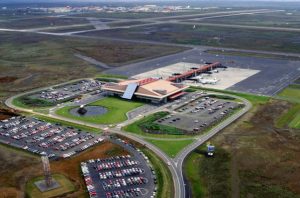 So this first flight was what we called a test flight to OZN equivalent.  OZN was the very tip of Greenland and would be somewhere we would know exactly where we were if we reached there.  So we needed to know how much fuel it would take to get to there because from there we could calculate again how much time to expect to get from there to Iceland.  So this first flight was a test flight to the equivalent of OZN and we used 53.5 gallons in 4.0 hours with an average speed of 174 knots.  And the total average was 13.3 gallons per hour including the climb.  And so we calculated that if we used that amount of fuel to get to OZN in our real adventure we would have 64 gallons of fuel left.  So accounting for our total fuel. That was on September 7th.

And so we’re in Bangor, Maine.  And September 8th flight number two we flew from Bangor, Maine to Moncton, New Brunswick.  A quiet VFR flight along the coast into Moncton for the Canadian Ministry of Transport examination.  The Canadian authorities required us to take this exam.  But we both remember this.  There’s a note in the logbook.  A waste of time and fuel.  But we had to take it.

So now we’re going from Moncton to this place where our flight really will begin.  So September 8th, the same day.  Third flight of the trip.  We flew in and out of the clouds at 6,000 feet.  Spectacular, bleak, rocky terrain. Many lakes and largish rivers.  The NDB was functioning well.  So we had a good nondirectional beacon.  The one, the ADF that we’d been changing.  The fuel flow was about 7.1 gallons per hour on low altitude cruise.  So that was a four-hour flight getting us into Goose Bay, Labrador.

So we’re now Goose Bay, Labrador early in the morning ready for our first flight. The logbook entry is probably the best way to see what happened.  We climbed out through a hole in the clouds using minimum time on cruise climb.  We were forecast for tailwinds from OZN.  And we made a decision beforehand that we had to arrive at OZN having used up only one half of our fuel flying from one tank, and that if we reached OZN with half the fuel then we could go on.  If we had to change to the other half of the fuel, then we knew we didn’t have enough to go on to Iceland, and we should divert to the only airport in Greenland where we could get fuel, which was a long way further north.

But arriving at OZN we found that the right-hand fuel was empty and we had had to change to the left just shortly before.  But we looked at each other.  I distinctly remember this.  It was quite noisy in the aircraft and we looked at each other and shall we go on, and we both pointed up and on. We decided even though we had changed fuel to the second half of the tank at OZN we would go on.  Because we had been forecast favorable winds from OZN to Iceland. However, that forecast was not correct, as we slowly began to find, because in Iceland there were two major airports available to us.  Our target airport was Reykjavik, Iceland.  But before that there was an air force base at Keflavik, Iceland.  But if we landed there of course we wouldn’t have got a record, because we’d filed to go to Reykjavik. Keflavik, the air force base, had a very high frequency omnidirectional range transmitter, the VOR.  And from that we could get our distance to the airport when we could receive this VOR.  And they have a range of oh, at the altitude we were at, probably 200 miles.  And so we expected to receive the VOR from Keflavik with plenty of warning.  But assuming we had a tailwind and knowing the length of time we’d been flying from OZN we expected to start receiving signals from the Keflavik VOR.  But nothing came.  We got no signal.  Kept tapping the radio.  Maybe the needle is stuck.  No.  No signal.  No signal.  And it became clear that we really weren’t as far towards Keflavik as we’d hoped. There must have been not a tailwind but a headwind.

And then eventually we began to receive the VOR telling us quite clearly that we were much further away from even Keflavik than we had hoped.  So things were beginning to look a little bit sticky.  But Field calculated that we had a pretty good gliding range if we ran out of fuel at 23,000.  So if we stayed at 23,000 and we ran out of fuel we still would be able to glide to one of these two airports.  So we didn’t say anything to anybody that we were low on fuel when we passed Keflavik at 23,000.  But when we were about halfway between Keflavik and Reykjavik now it was just as easy to glide forward as backward.  Then we could tell the air traffic controller that we were short of fuel and that we hoped that they would expedite our ability to land.  And that’s in fact what we did.  We eventually passed over Keflavik and halfway between Keflavik and Reykjavik told the Reykjavik tower that we were short of fuel.  And they didn’t say anything.  But then as my logbook says when we were 120 DME.  We could measure the distance from Keflavik.  We were at that point having flown 7 hours and 4 minutes.  But the groundspeed was low on this leg because of the headwind.  And then after contacting the tower we could see that we were going to land on runway number two.  But there was a Fokker air transport regular flight on final.  And we would have to wait for him to land.  But there was some mumbling and conversation that we couldn’t understand because it was carried out in Danish, the language of Iceland, and the Fokker landed well down the runway. And we were allowed to land even before he’d cleared the runway.  Which I’m sure was illegal.  But we touched down at 8 hours and 17 minutes.  The previous record was 8 hours and 27 minutes.  So we had beaten the old by enough to claim a new record but we had only five gallons of fuel left in the right tank.  And remembering that we’d added three gallons at the end of the runway in Goose Bay before we took off, it was clear that we really didn’t have much fuel left.  That record lasted about 20 years before somebody else beat it.  But we had a real adventure in getting to Iceland.