Dr. Smithies talks about growing up with color blindness. 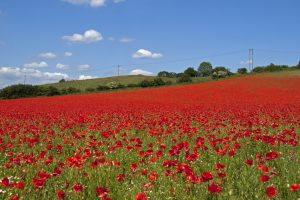 Every pilot knows the need to have a medical certificate that is issued by an FAA, Federal Aviation Administration, approved examiner. I have a medical certificate, or I had a medical certificate, third class, which has on it a restriction: not valid for night flying, or by color signal control. That is the result of being colorblind. And I had known for many years that I was colorblind, and I failed the Ishihara color vision test when I went for my medical examination by Roy [Yiesel?], who was the medical examiner at that time in Madison, Wisconsin. There is an entry in my logbook in an attempt, as it were, to get over this restriction, because you could have a waiver if you could demonstrate that you could see the different color signals used by the control tower. Well, I failed this, of course, also, so I was not able to get a waiver. I knew that I was colorblind a long time ago, and it’s rather interesting to think about how a child finds that out. And I found it out probably when I was, oh, certainly in primary school, maybe age six or seven or so, thereabouts, because we would drive with my family in the countryside in the summer sometimes to look at the neighborhood, as it were, drive in the country. And in the spring everybody would be saying, “Oh, look at those poppies in that field of grass. Aren’t they beautiful?” And I remember saying, “Where? Where? Where?” I just couldn’t see these poppies in the grass. Another corollary, you might say, another side effect of the color vision lack was that if we went picking strawberries, I would come back with a miserable little jar  with these yellow-ish looking things, and they didn’t taste good. They were very poor. And everybody else would have big mountains of beautiful, red strawberries. And so I never liked going strawberry picking. I didn’t realize why I didn’t like it, but that’s why: because I couldn’t find them. And, in fact, even to this day I’m not really very fond of strawberries to eat. And there’s a constant entertainment value, as it were, in this color vision business, because you always find that people are surprised at what a color vision person will see. In fact, I’ve had a number of friends who were colorblind also. When I was an undergraduate in Oxford, where one would have an evening meal in the hall of the college, Balliol College, and I had a couple of friends there who were colorblind also, and Oxford at that time had, and probably still in the summer has, people wearing — some people who were sports-inclined would have a colored blazer with multiple stripes of color, indicating what sport they were interested in, perhaps with the college color. And there were a couple of us, or two or three of us together, who knew that we were colorblind, and we all agreed on what the colors of the blazer, the stripes of the blazer were. And then, as we got closer, it changed, and that’s another feature of color vision, that it depends on the angle, how wide the area of color is, that you can see different colors. Anyway, we all agreed on what the color was as we got closer that it changed to, but neither the distant one nor the close one were right, but at least we all saw the same. I always had a problem, as a geneticist, at first, in understanding why it was that I was colorblind and my father was colorblind, because the genes controlling color vision are on the X chromosome.  But this really was solved, because my father had a different type of color vision problem.  His was not so severe as mine.  So that meant that my father had an X chromosome with a color vision defect and I got my X chromosome from my mother, so she had an X chromosome with a different color vision defect, meaning that there were two X chromosomes, at least, in the family, with different color problems.  And my sister inherited both of these.  Because, of course, she’d get an X chromosome from my father.  So she got the X chromosome with his color deficiency.  And she got an X chromosome from my mother, with my type of color vision.  So she was heterozygote.  But because of the random X inactivation, she obviously had cones some of which were normal at one color vision locus and abnormal at the other, and vice versa, so that she had normal color vision.  But both her X chromosomes were carrying colorblind mutations.  And then that meant that her boys, and she had two boys, each of them was colorblind, because she had…  But they were differently colorblind.  One was colorblind like my father and one was colorblind like me.  And it was a different color vision defect. So that meant my sister, Nancy, was very good at understanding what color vision problems were, because she had two sons, both of whom were colorblind.