Dr. Smithies explains growing up in a small English town and getting inspired to become a pilot when he saw a movie called “Biggles.” 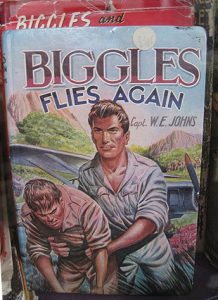 Perhaps the single most important part of my life, other than my science and family has been my time spent flying. And people often ask me how did I ever begin…Well it actually began when I was a child in several ways. It began when I was probably about eight, nine, or ten, or even earlier than that, because I lived in a little village called Copley in Yorkshire, north of England. And on Saturday morning, we used to go to a nearby town, where they had a movie theater, and on Saturday morning, they would show serials and little movies of that sort that were suitable for children. And you could get in there and pay two pennies. Even at that time, that was not very much, so it was called the “Tuppenny Rush,” the two-penny rush, and we would go to the Tuppenny Rush and see these serials. And one of the serials was about Biggles, and Biggles was a pilot, and it was very interesting to learn what he did. And there was also another serial called “Tailspin Tommy,” and these two brave pilots
would get into various problems flying, and escape miraculously. And of course, this was very exciting to children, seven-year-old, eight-year-old little boy. And I got entranced by that. And then, when I was now a little older, probably an early teenager; in fact, I know what the age was, because it was in 1939 when I was 14, I’d been reading about gliders, and about soaring at that time, and thought I might like to try gliding. So, I went to the local airport. I don’t actually remember which one it was, or maybe I went to visit a glider port, probably near Bradford in Yorkshire. And, there was a man with a broken arm, and a damaged glider, that he’d damaged when gliding, but nonetheless, he was a glider pilot, and I talked to him about the possibility of learning to fly, but unfortunately, it was also the time of the outbreak of World War II in the United Kingdom and all private flying was not possible anymore. So, although I talked to a glider pilot, a somewhat damaged one at the time, I never did fly with him.

So that was not the beginning of my flying.